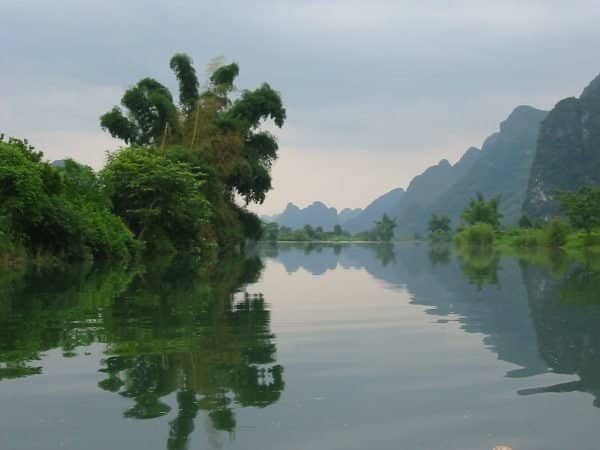 Guilin: on the Fringes of China’s Empire

The Nan mountains, dividing the Yangzi river basin to the north from the Xi river valley to the south, have always protected Guangxi province from unwelcome intruders. They not only shelter this tropical region from the cruelly bitter winds of the Gobi, throughout its history they’ve also shielded it from the encroachments of the Imperialist Han Empire.

From their first invasion here in the 3rd century BC until the 12th century AD, the Han Chinese considered Guangxi an exotic region inhabited by barbaric and unruly aboriginal tribes. From the Yuan dynasty (1271) onwards Imperial control was only successfully maintained by the use of force. Even today, this region, which hosts 12 different ethnic minorities, boasts a fair measure of independence. It is officially known as Guangxi Zhuang Autonomous Region – its largest ethnic minority is comprised of Zhuang people.

The construction of the Ling Canal in the 3rd century B.C.E. made it possible for small craft to pass from the Yangzi river to the southward Xi river. Guilin, named after the scent of the local sweet osmanthus trees, was established in the 1st century B.C.E. on the west bank of the Kuei River, which linked the Ling Canal to the Xi River. It grew into an important trading post on the route between central China and the southern ports of Guangdong (Canton), so that under the Ming dynasty (1368-1644) a garrison was set up here. During this period, a policy of “civilizing” military colonization promoted agricultural production in Guilin’s surrounding fertile valleys.

From this time until 1949, Guilin was primarily a handicraft and agricultural center. Under Communist rule however, when industry was promoted in inland areas, factories were built here for the manufacture of chemicals, engineering, paper and agricultural equipment. Nowadays, high transport costs are driving such industries to locations on China’s more accessible Eastern coast. Forced to adapt to the regulation of market forces, Guilin is encouraging tourism and food processing in their stead.

Situated 65 kilometers (40 miles) east of Guilin, Yangshuo is an ancient town that was declared a county seat during the Jin dynasty some 1,500 years ago. Nestling amidst spectacular limestone spires and towers, it has long been recognized as a wonderful retreat to enjoy Guangxi’s karst scenery. For as many generations, it has also been known for its abundant produce – particularly its oranges, tangerines, pomelos (a relative of the grapefruit), chestnuts and persimmons.