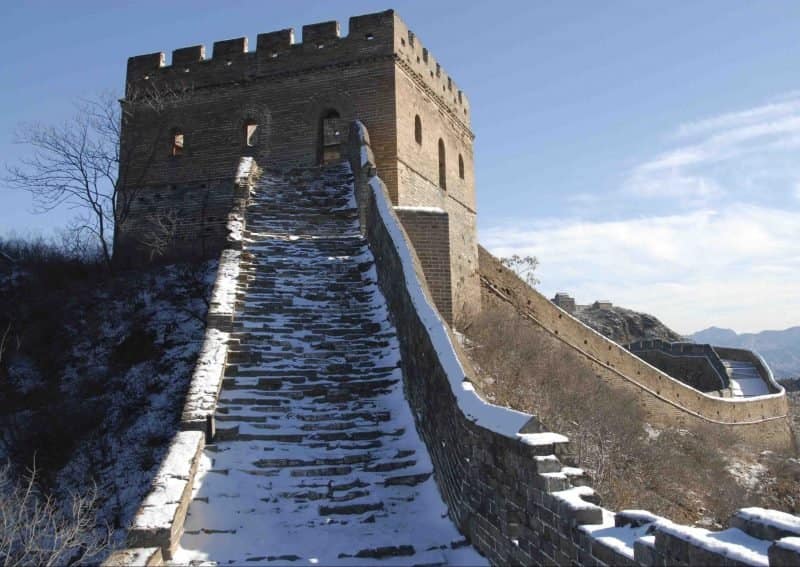 On the Incredible Great Wall of China

When you see this massive structure snaking its way across precipitous, rocky ridges, sometimes even lain across iron beams to bridge windy chasms, you will be amazed by the sheer scale of the undertaking. From the Bohai Sea in the East to Dunhuang’s desert plains in the West, the Great Wall stretches its knotted spine. Looking at it, perhaps you will wonder why.

From earliest times civilizations such as those of the Greeks and Hebrews enclosed their cities within a perimeter wall. In China during the fifth century BC, the Warring States took this concept one step further extending their walls to encircle entire territories. When Qinshihuang, the Qin dynasty Emperor, unified China, he joined the walls along the Northern frontier to prevent the incursions of the barbaric northern tribes. Thousands of slaves were sacrificed for the completion of this ambitious endeavor, and the Great Wall was viewed by the people as a symbol of tyrannical oppression. As subsequent dynasties expanded or contracted, so some sort of wall was built to delineate their Northern frontier.

It wasn’t until after the Ming dynasty swept away Mongolian rule in the fifteenth century that the Great Wall was constructed as the regal and systematic fortification that you can see today. To understand the motivating reason for this Ming dynasty project, we must first review what it meant to undergo a Mongolian invasion. When the Horde burst out of the steppes a century earlier, this illiterate, nomadic tribe did not limit itself to the merciless murder, rape and pillage of people and cities. Such was their appetite for conquest that the wild nomads even burned their mark into vast swathes of cultivated farmland. The traumatic scar that these warring foreigners left on the Chinese psyche can today be measured in cubic meters according to the dimensions of the huge and incredible Great Wall of China.

The Ming dynasty’s effort to reinforce the wall was not in vain. The Great Wall was useful in checking the advance of the Manchu invaders in the seventeenth century. That the Ming finally succumbed was not due to any failure in this fortification, but to the worldly guile of a ravishing Manchu princess. That, though, is another story.

Time has now washed the Great Wall clean of its tyrannical undertones. While some Chinese people gloomily regard it as a symbol of China’s insensitivity to new ideas, others prefer to view it as a remarkable, historical achievement. Richard Nixon ably summed up this view: