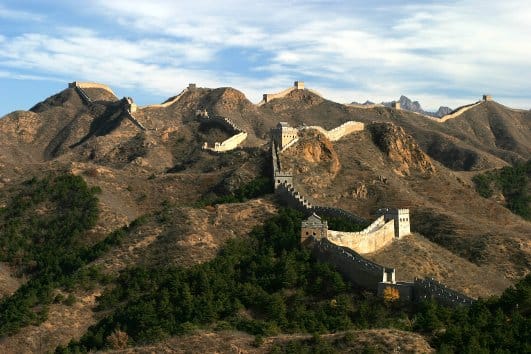 What It Takes To Walk The Great Wall Of China

On October 9, 2000, five explorers set out in the middle of the world’s fifth-largest desert, the Taklimakan, as a team to walk the entire length of the Ming dynasty Great Wall of China. After a few weeks, winter set in and the terrain was covered in snow. By March the following year as winter lifted, only one remained – Argentinean explorer and photographer Diego Azubel, who continued to trek alone for another nine months arriving at the East China sea at the end of the following year. This was Diego’s first trek in China. (His second took him across the Tibetan Himalayan mountains and through the Nepalese civil war… don’t ask)

Now married with a trilingual daughter, I asked Diego what it takes to walk the entire length of the Great Wall of China?

Good shoes, and a lot of time!

But as with anything else, you need to be sure that you want to do it. You need commitment. Because these walks, more often than not, take much longer than expected, and test you in ways you probably never experienced before. Also, as opposed to climbing up a mountain where there is only one way up and usually small windows of opportunity when the weather allows you to do the climb, in a long horizontal walk it is very easy to ‘take a detour’ or a break. And when you do, it is harder to come back.

Why did you want to walk the Great Wall of China?

I first came to China in 1997 and left with the intention of coming back. While I was in London editing a story on slavery in Mauritania, an opportunity to walk the Great Wall of China arose, and I felt I had to take it. I had always been the type to take on new adventures, and walking the entire length of the Great Wall of China sounded very attractive.

How does the Great Wall inspire you?

I love going back to The Great Wall. Whenever I go back I get a feeling of joy when I see it from a distance. It brings back memories. Very nice memories.

During my journey I developed a relationship with ‘her.’ I guess after 15 months of spending every day by The Wall, it would have probably been stranger if I didn’t develop some kind of relationship than if I did. And because I humanized her, talked to her, and sometimes I even thought I heard her talk back, I kind of felt less alone despite being alone. And when I felt tired, both physically and mentally, I felt I wasn’t allowed to complain. Somehow it always reminded me of what it took to build the Wall. Very often I came across graves on the side of the wall, and although these are much newer than the wall they did remind me of the many men and women that died building it. I felt I would be disrespectful to do anything but finish what I had started.

What did you learn from walking the Great Wall?

Many things. The first one that kept popping into my head during the walk was that if I didn’t get up every morning and move my own feet, I was never going to reach the end. If I didn’t move my feet no one was going to move them for me. It is an obvious thought knowing that no one will do it for us if we don’t do it ourselves, but being there and knowing that if I didn’t get up every morning and literally put one foot in front of the other to walk I would probably still be there… it doesn’t get any clearer than that.

What is it about the Great Wall that has captured the attention of the world?

Number one would probably be the old myth that it can be seen from space. But also the fact that there is so much history behind it as well as so many stories, some of which are still being argued as to whether they are true or not. And of course, it is a symbol of China, one that China itself markets very well. So if one comes to China, one will probably schedule a trip to the wall. And like Mao said: he who has not climbed the Great Wall, is not a true man.

The photos can be seen on www.thegreatwalk.com and the video was shown on the National Geographic channel a few years ago. It will be available for viewing on thegreatwalk site very soon.

Have you spoken to many groups about this experience?  What kind of groups and what has their response been?

I have given talks to various groups of people ranging from explorers festivals to schools to corporate events. So far the response has been very positive, and it is also great for me because I get different questions every time. I can see that people are interested in different things.

My favorite was getting a bunch of questions from a 7 year old boy while I was giving my second talk a couple of months after finishing the walk. It was at an outdoors festival in Birmingham. I could see people looking at me with smiles on their faces but not asking any questions. Then this boy started. Where did you sleep? How many kilometers did you walk? How long did it take you? What did you eat? And after every answer he would go “Wow…’ After a few questions from him, the audience loosened up and began asking him to ask me their questions.