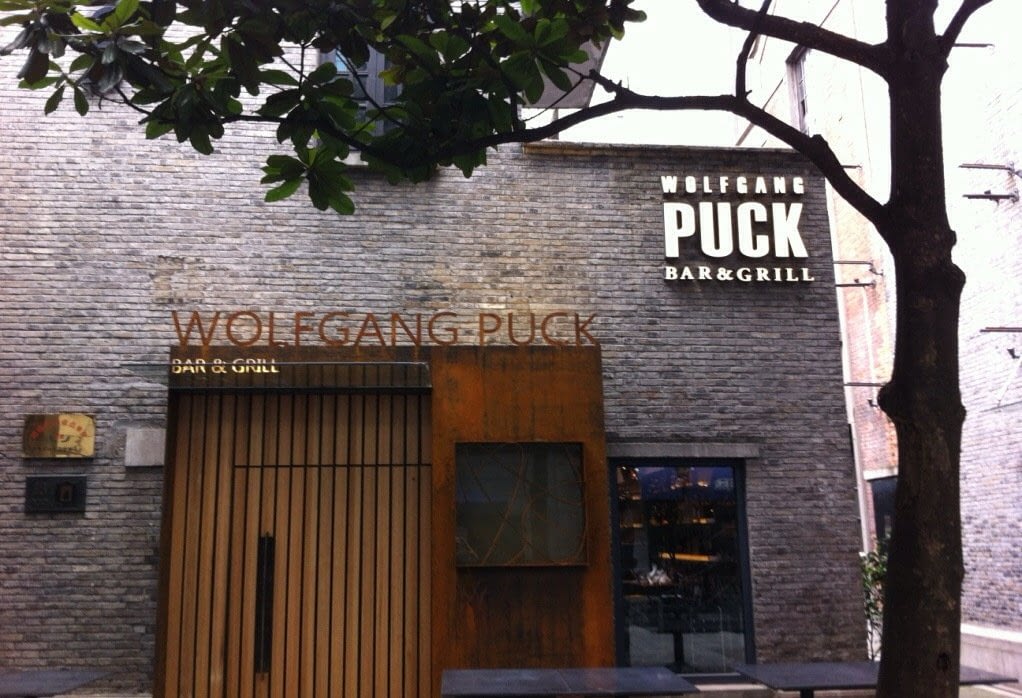 Wolfgang Puck, the famous Austrian-born American chef and restaurateur has brought his acclaimed American casual dining concepts to China for the first time. Wolfgang’s new hot spot is perfectly situated in the hip and affluent shopping and eating district of Xintiandi in Shanghai. And as there was a new celebrity chef restaurant in Shanghai, my friend and I felt obliged to experience it first hand. The outside of the restaurant was inviting with a soft gray brick exterior contrasting with rich wooden doors and flowing metal vines swirling through the windows. Walking in, we found the restaurant was quite full, with over two thirds of the place filled up. The décor inside made use of natural materials to deliver a modern atmosphere with a casual and elegant feel. Wood floors, soft leather chairs, granite tabletops and exposed light fixtures exuded a warm and urban atmosphere. This minimalist concept created an elegant and casual feel, which extended to the seating area on the terrace. Since it was a beautiful spring day in Shanghai, we opted for a table outside. As we took our seats on the terrace we decided it was the perfect spot to watch the world go by on a Saturday afternoon as friends, couples and families made their way through the streets with parcels in hand and smiles on their faces. After we had settled into our seats a server immediately came over with a menu. The western style menu was not overly extensive, but it had something to satisfy everyone’s tastes. The menu featured some of Wolfgang’s signature dishes such as handmade pizzas as well as a selection of salads, steaks, roast chickens, seafood dishes, pasta and the best part – desserts. The price range of each item on the menu fell between the range of $15 for a salad to around $45 for a steak.

After going over the menu and discussing the pros and cons of each dish and what we were in the mood for, my companion opted for the Roasted Sea Bass accompanied by garlic spinach & charred lemon, while I decided on the Garlic & Herb Marinated Half Chicken with rosemary jus sauce. In addition to our mains we decided to share the Shrimp ‘Louie’ marinated in a tomato sauce as an appetizer and the Vanilla Bean Crème Brûlée with seasonal fruit for dessert. Following a casual catch up conversation our appetizer arrived. The Shrimp Louie turned out to be an excellent choice and a good portion to share between the two of us. Conversation ceased as we both tucked into the dish, agreeing we had made the right decision with the shrimp. After the remains of our starter were cleared away my companion and I continued to catch up on the happenings of our day-to-day lives while enjoying the lively atmosphere of Xintiandi’s pedestrian street. Xintiandi is one of the most popular shopping areas for young and well-to-do Shanghainese and foreigners alike so there is always something to see, do or eat.

Our food arrived in good time and when it did we discovered it had been a wise decision to share both the appetizer and dessert, as the portion size of our mains was huge. Although the bar & grill had a European meets Asia flair the portion sizes were certainly American. Our two mains could have easily fed a family of four. Never one to complain about too much of a good thing, my companion diligently began to eat her fish, while I endeavored to enjoy my chicken. After a chatty pre-meal conversation, silence ensued as we attempted to tackle our mains, that is until about half way through eating when I glanced up at my friend and in a defeatist tone admitted: “I don’t think I can finish this.” Looking up bemused, with a smile on her face she joked, “I don’t blame you. When it arrived I wasn’t sure whether you would eat the chicken or the chicken eat you!”

By the time our Crème Brûlée arrived we were already full, but of course we had to try it. Like the other items we ordered the serving was quite large, presented in a dish the size of a soup bowl. With its golden-brown crust and vanilla-coloured crème hidden beneath, it looked too good not to try. Although rather sweet for my taste the Crème Brûlée had the perfect balance of crispiness and vanilla bean crème, it was absolutely delightful. I am not ashamed to admit that we finished the entirety of our dessert. At the end of it all both my companion and I were bursting! The bill for the two of us ended up being USD$120, without ordering drinks. Overall, our food was good. The star of the meal was the Crème Brûlée followed by the Shrimp Louie. Our mains were satisfactory, the chicken wasn’t too dry and the roasted bass was also well prepared, although nothing to write home about. However, it was the sheer size of the portions that was a bit intimidating and left the biggest impression. Overall, it seemed like a good place for families, as the menu had a large selection of child friendly options. The atmosphere was very family friendly as well – relaxed casual environment where parents and kids alike could relax and enjoy a good meal.