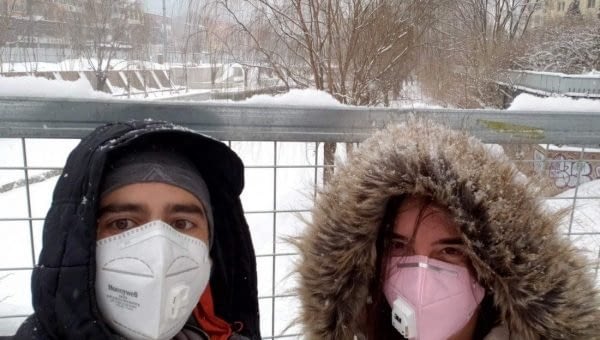 Beijing Life in the Time of Coronavirus – Part 1

““One hundred and ten!” one of my neighbors yelled proudly from our shared common courtyard. He had been walking around the inside perimeter of our block of flats for the better part of an hour, phone in one hand and a leash connecting him to his sluggish corgi in the other. Face covered with the now obligatory mask, he walked over towards another dog-neighbor duo sitting on a bench enjoying the spring sun and in his booming voice announced he was increasing his loops by 10% each day. The neighbor didn’t bother to mutter a response, and the man’s corgi, unimpressed, quickly slumped alongside his fellow canine.

I am ignorant of what constituted my neighbor’s exercise routine before Covid-19, but Beijing has implemented such restrictive measures on movement that most people are weary to leave their homes except for pressing reasons. Having lived in the historic center of Beijing for almost ten years now, the changes have been unlike anything I’ve ever witnessed. The maze-like hutongs (alleyways) used to have shoulder-to-shoulder crowds of people flocking to the restaurants, bars, shops and tourist attractions of the area. These are now all sealed off with a retractable fence at every possible entry point and manned day and night with at least two, typically middle-aged, volunteers. Working in shifts of two hours, they are armed with a walkie-talkie, a laser thermometer and, most importantly, a sense of duty for collective action against a common enemy, this new virus. A large percentage of restaurants and bars remain closed, and anywhere which may be a focal point for crowds has been shut. The main exception is public parks which, to the relief of many, have kept their doors open to visitors so long as they don a mask and agree to a temperature check.

Although these measures were greeted by skepticism around the world when they were announced, the numbers should be enough to placate doubts of their effectiveness. The early days of February when thousands of new cases were being diagnosed on a daily basis are now unthinkable, and the trickle of cases that continue to emerge -outside the epicenter of Hubei- are mostly imported by travelers returning from one of the other large clusters around the world. As of this week they are being quarantined in specially designated hotels, so while they are mostly returning residents and not luxury travelers to China, measures like this will affect travelers for some time to come. Nonetheless, the drastic downward trend in cases is a welcome respite from the early days of the virus spread, and countries where the virus still looks to be gaining momentum should get some reassurance from it.”

You can now read Part 2 for a follow up of Jaime’s experiences living through the quarantine in Beijing.

– Jaime is one of Imperial Tours’ Itinerary Designers and a Beijing resident.