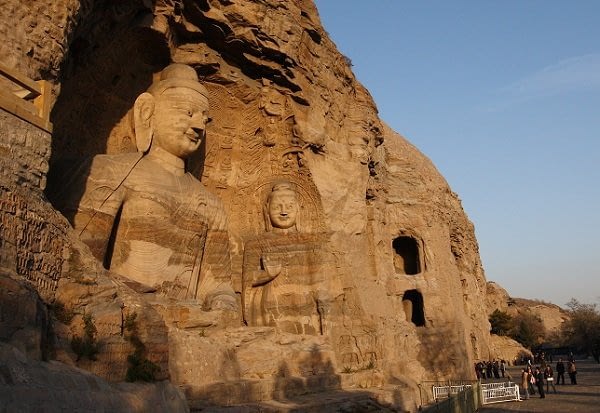 Giant Buddha carved out of rock at the Yungang Caves, Datong

On day one we leave Beijing on an early morning flight bound for Datong, a short one-hour hop away, to visit one of the most remarkable Buddhist cave sites in China and the world. You will be amazed by 51,000 statues carved in the sandstone face of 252 grottoes that date from the fifth and sixth centuries. The Tuoba clan, a nomadic Mongolic people, conquered the kingdoms of northern China in the fourth century to establish their Northern Wei dynasty (386-534). To solidify their dominion, they co-opted Buddhism, then a fashionable and popular new religion. The impressive Yungang Caves are the expression of their official state creed.

Having enjoyed this rare cultural treasure, we head to the city for a bite to eat before a four hour drive south to the nineteenth century phenomenon that was Pingyao. Thanks to some innovative financial engineering, townsmen here founded a national remittance system that gave rise to its most prominent banking houses. At one time, the Rishengcheng Exchange House, the first and best known banking house, was responsible for half the silver trade in China!

That’s for tomorrow however. This evening, we arrive at Jing’s Residence, a boutique hotel in Pingyao designed by Antonio Ochoa-Piccardo, a well-known Venezuelan architect working in China for many years.

Gate at the ancient walled city of Pingyao

Although its history dates nearly three thousand years, Pingyao owes its international fame to its banking prowess in the nineteenth century, which lent a handsome uniformity to the orderly Ming dynasty design of its ancient town center. Thanks to the completeness of this town’s preservation, walking around its grid pattern streets it is easy to be transported to former times. The key institutions of an ancient functioning town can be visited and understood. For day two we have picked only a selection of the 300 sites and 4,000 ancient homes found here.

The town’s most significant structure is the Yamen administrative building, which formed the heart of the town’s government from the thirteenth to the nineteenth century providing social services as wide ranging as town law court to a medical care facility. We walk along a small portion of the 3.7 mile (6 km) city wall to the Rishengchang Exchange House. The City Temple is unusual in uniting for worship the Kitchen God, prized by farmers, with the City God, prized by various Emperors, with the Fortune God favored by all.

After lunch, we drive about an hour out of town to view Pingyao’s most famous site with its most unique. The austere family compound of the Qiao family provided the setting for Zhang Yimou’s world-renowned classic movie “Raise the Red Lantern” and is a much celebrated example of a Shanxi-style mansion. This is near the Shuanglin Temple, which houses an impressive collection of original statues dating from the tenth century. As the destructiveness of China’s history has caused the loss of most ancient temple statuary, it is a rare treat to be able to compare high-quality examples from the Song, Yuan, Ming and Qing dynasties.

The next day, after an early breakfast, you head to the train station to get on a 3 hour bullet train to Xi’an to continue your journey through China. If you are constrained by time, then you can also visit Pingyao by itself for a day between Beijing and Xi’an.

For more information on adding Pingyao and Datong into your luxury China itinerary please contact our Itinerary Designers by filling in this form or emailing reservations@imperialtours.net