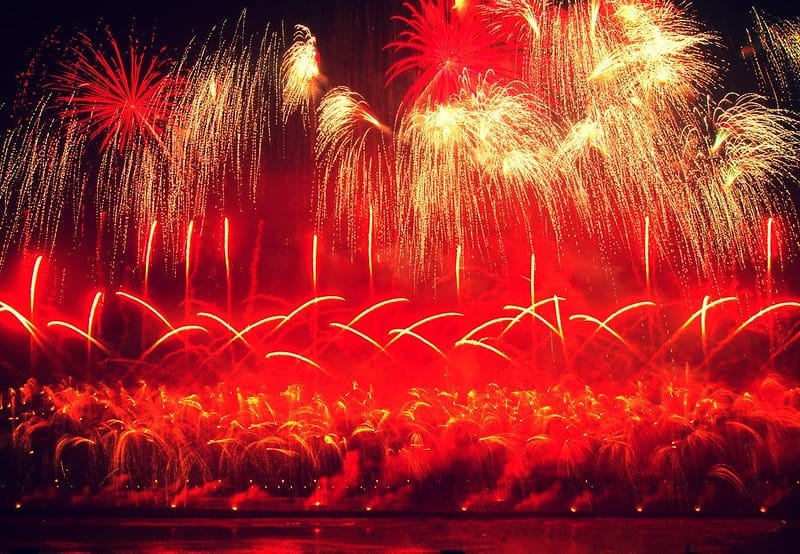 Mainland China has six main holidays every year in addition to New Years on January 1st which it celebrates in tandem with the rest of the world. The majority of China’s festivals follow the Lunar calendar and are based upon the monthly cycles of the Moon’s phases. Of the six holidays, two are labeled “Golden Week” holidays because they last seven consecutive days.  The others comprise of one day holiday.

In practice, a unique feature of mainland Chinese holidays that differs from other countries is that weekends are usually substituted with weekdays next to the actual holiday so as to create a longer 7-day “holiday” period when in actual fact workers only get three days off. It is therefore common for staff working in Chinese companies to work during weekends to make up for this. For example, if the 3 days holiday lands from a Monday to Wednesday, the government will give everyone Thursday and Friday off as well, which added to a weekend equals to seven consecutive days off.  However, workers will need to work the weekend prior.

Below is a recap of China’s holidays, as well as advice for what which you’ll want to avoid when planning a private luxury tour with Imperial Tours. Note that Hong Kong and Macau observe slightly different holiday schedules, with some festivals inherited from their respective colonial days.

Also known as Chinese New Year, Spring Festival is one of the most festive holidays in Chinese culture when families gather in the ritual of reunification to send off the old year and greet the new one.  Typically an indulgent meal is prepared on New Year’s Eve that includes staples such as dumplings, noodles and fish which are symbolic of longevity.  Red clothing is worn, couplets with good wishes adorn doorways, red packets of money are distributed to children, and over the course of the holiday fire crackers are set off to ward off evil spirits (though in recent years the government has limited this due to noise pollution and safety). Spring Festival is one of two ‘Golden Weeks’ where an official “7-day” holiday encourages much of the population to return home, thereby marking the planet’s largest annual human migration with roughly 3 billion passenger journeys taking place, straining transport routes and quite literally reducing the world’s largest economy to a shuddering halt.

Is this a good time to travel?  Although temperatures are cold at this time of year, as long as one packs appropriate cold-weather gear and is prepared, it’s a good time to visit China because tourist sites tend to be less crowded.

As its name indicates, this holiday commemorates and shows respect to ancestors. Relatives visit graves, offer food, tea or wine to the deceased, burning incense and offering joss paper (representing money … because one still needs cash in the afterlife).  Observed by the Han Chinese, families travel to ancestral burial sites to sweep tombs, remove weeds and add fresh soil.  Qing Ming Jie was not ‘officially’ celebrated as a day off in the PRC until about a decade ago.  When the communist government took power in 1949, they scrapped traditional holidays from their calendar but when China’s May Holiday Golden Week was scaled back in 2007, three traditional holidays were brought back: Qing Ming Festival, Dragon Boat Festival and Mid-Autumn Festival (more on all these holidays as you read on).

Is this a good time to travel?  Since this is a short holiday, it’s generally fine to travel during this holiday.  We might advise that you avoid certain cities where roadways can become congested and affect touring such as in Hangzhou.

The literal translation for “Wu Yi Jie” is May 1st Holiday.  Like many other countries, China celebrates May Day to commemorate its workforce.   It was officially established and approved as a holiday by the Chinese government in 1949 following the formation of the Peoples Republic of China. During the Cultural Revolution, this day carried political significance and was considered one of the most important holidays in the country and lasted 7 days. At the time, nationalistic rallies and demonstrations were organized to celebrate its workers, however, today the nature of the holiday has evolved, lending to a more cheerful and casual family holiday with just one day off.  As mentioned earlier, in 2007 they reduced this holiday to one day therefore freeing days to dedicate to other holidays.

Is this a good time to travel?  Yes, generally a good time with ideal weather in most destinations.

This festivity takes place on the fifth day of the fifth month of the traditional Chinese calendar usually falling in June.  Although legendary origins of the Dragon Boat festival vary regionally with an over-arching theme of water-related tragedies, they all carry traditions in Chinese culture such as virtue, spirit, loyalty, honor and love.  Dragon Boat Racing is the highlight of this holiday with spectators swarming to watch teams competing in wooden boats shaped and decorated in the form of the dragon and manned by 30 to 60 people paddling harmoniously and swiftly to the sound of beating drums.  Hong Kong and Hangzhou are where the most lively dragon boat racing spectacles can be enjoyed.

Is this a good time to travel?  Yes, it’s a good time and if you are in the right city, you’ll be able to catch some Dragon Boat races.

Several varying myths surround the genesis of the Mid Autumn Festival.  According to one legend, the moon goddess Chang’e overindulged on an elixir and flew to the moon with her rabbit companion. Another tale says that Chinese emperors in the Zhou dynasty (1045-221 BC) worshipped the moon to bring a bumper harvest the following year.  Whatever origin one might believe, this festival is marked by not only distributing moon cakes to family members and colleagues, but also eating them, of course. The densely packed pastries often presented in gorgeous packaging traditionally come with all sorts of fillings such as salty egg yolk (perhaps an acquired taste?), lotus, red been or date paste. Now with a bit of creativity it’s rather common to find moon cakes filled with butterscotch, ice cream or chocolate!

Is this a good time to travel?  Yes, very good weather at this time of year.

On October 1st 1949, in front of a crowd of 300,000 people in Tiananmen Square Chairman Mao declared the People Republic of China’s National Day.  Called guoqqingjie, the ‘Golden Week’ holiday celebrates the founding of the People’s Republic of China by the Communist Party.  Large-scale military displays and parades are held to mark major anniversaries; the last impressive military display took place for the seventieth anniversary of the PRC founding in 2019 resulting in road closures in cities such as Beijing and Shanghai.

Is this a good time to travel?  If you can avoid it, it is advisable not to travel domestically during the week around October 1st. Since it is a popular time for domestic tourists to see the country, tourist sites are packed with local travelers.

– Nadia is one of Imperial Tours’ itinerary designers.