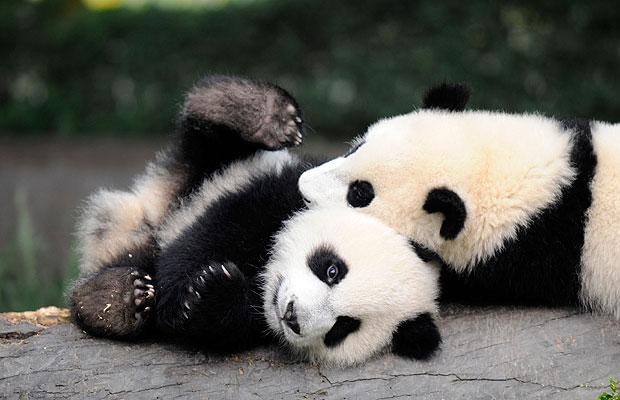 Introducing My Children to Pandas

Chengdu is a popular destination for families with kids for one main reason: Panda Bears! In 2019, the captive giant panda population at the Chengdu Research Base of the Giant Panda reached 200, making it the only place in the world where one can admire so many Giant Pandas within the span of a few hours.

The last time I visited Chengdu from Beijing (3hr20min flight) with my two daughters, the panda base had five cuddly one-year old panda cubs proudly on display.  We, of course, headed directly to view the babies first.  My daughters squealed with laughter as they watched the five fuzzy black and white fur balls engrossed in a clumsy game of ‘tackle and tumble’.  Next we ambled down the tree-line paths to view other enclosures that were thoughtfully created to simulate the treasured animals’ ecological natural environment.  The adult pandas were nowhere near as active as the little ones prompting my nine-year old to question “Aren’t pandas supposed to be active in the morning?”  She had a point.  Although it was still morning, in contrast to the playful toddlers, most of the adult pandas we observed were chewing on bamboo shoots, moseying around looking for food, or lazily lounging in a comfy spot.

If simply seeing pandas isn’t enough, Imperial Tours can arrange for one to volunteer as a ‘panda keeper’ for a couple hours, an activity popular with both the luxury traveler and families alike, looking for a more exclusive or hands on experience. It begins with a brief educational session on the Giant Panda, then one gets busy cleaning panda cages, preparing their food, and feeding them! Unfortunately, my kids were too young to qualify for the ‘panda keeper’ activity (minimum ages is 12 and up).

A lesser-known animal we also spotted at the panda reserve was the endangered Red Panda, better known to my kids as Master Shifu from Kung Fu Panda.  Despite their moniker, red pandas are not closely related to the Giant Panda.   The small mammals may resemble bears or raccoons and were previously categorized as part of the bear and raccoon families, however, we learned that they are in fact a genus of their own known as Ailurinae.  The red panda is found in the mountainous forests of China, India, Nepal, Bhutan and Myanmar, where numbers are down to a few thousand individuals and decreasing every day due to hunting and habitat loss.  They are excellent climbers, forage largely in trees and eat mostly bamboo.

Let’s just say, a chance to meet Po would not have been complete without an encounter with Master Shifu as well.

– Nadia is an itinerary designer at Imperial Tours.

Note that several panda reserves are available. Your Itinerary designer at Imperial Tours can advise the best venue to visit based on your interests.