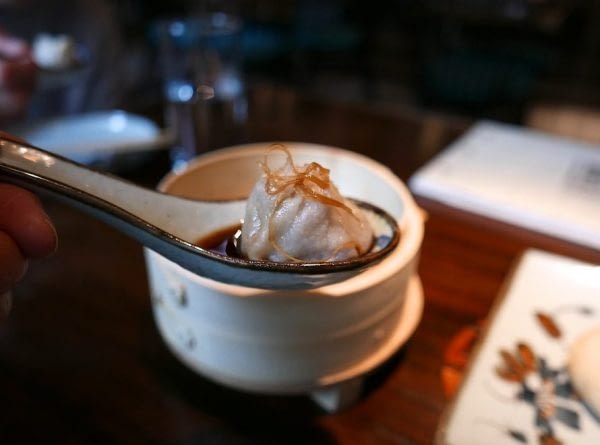 Even a cursory look into the culinary delights of the Middle Kingdom will reveal countless references to Xiaolongbao. These bite sized delights, traditionally filled with pork and soup, are a must try on any China itinerary. Xiaolongbao are often, wrongly, called small dragon dumplings because of the middle sound “long” which means “dragon”. However, the written Chinese character makes it clear that this “long” is in fact, “steamer basket”, thus making them “small steamer basket dumplings”. They can also be called “tangbao” or “soup dumplings” because whatever the filling, pork, shrimp or crab, they always contain a delicious savoury soup that explodes in your mouth – or all over your clothes if you’re not careful!

While Shanghai is widely credited with creating these tasty treats, in fact there is some debate about their origins. Shanghainese will tell you that they originated in Nanxiang, on the outskirts of Shanghai in 1875, while Nanjingers would tell you that those creations were merely a copycat of the soup dumplings already frequently consumed in their fair city. Suzhou, a delightful city near Shanghai famous for its traditional gardens, also lays claim to their creation. The result of this is that three different styles of soup dumplings have emerged, each delicious in their own way.

The traditional Shanghai variety, in keeping with Shanghai taste, has a sweeter soup and a bigger meatball. Enjoyed with vinegar, sweetened with a little sugar and ginger, they are truly tuned to the Shanghainese palette.

The Nanjing Xiaolongbao have a wafer thin wrapper, through which you can see the soup hanging in the bottom of the dumpling. These require a delicate pinch with your chopsticks so as to avoid puncturing the skin and wasting the more savoury soup.

Then there’s Suzhou, where these dumplings are usually called “tangbao”, because they contain noticeably more soup. Suzhou went for a bigger dumpling all together, with more soup, a thicker skin and a more savoury flavour.

It’s difficult to choose a favourite as they’re each delicious in their own way.

For those who are fully chopstick-competent, the traditional way of eating is to pick one up by the thick part at the top, dip it in vinegar and sit it in your spoon. Take a tiny bite out of the side of the dumpling and suck out the soup. The theory goes, the louder you slurp, the cooler the soup. Then dip the dumpling in the vinegar a second time and pop the whole thing in your mouth in one go.

For those too refined to slurp, punch a whole in the dumpling skin with a chopstick and tip the soup out into your spoon first.

How do they get the soup into the dumpling?

You might guess a syringe, pouring the soup in before it’s sealed, or some kind of steeping process. Actually it’s much simpler: first they boil up the pork skin for a long time until all the collagen-y goodness boils out (it’s collagen, so it must be good for you!), then that mixture is strained and allowed to set into a gelatin.  This gelatin is mixed in with the meat as a solid at room temperature, then when the dumplings are finally steamed the gelatin melts and creates the soup. Eat them while they’re hot or there’ll be no soup to be found!

Where to eat them

These tasty treats can be found all over Shanghai, and our carefully curated luxury China tours will introduce you to some of the best fine dining options. You can even drop by the famous Din Tai Fung, where you could try them filled with chocolate – not very traditional but fun nonetheless! Or for a more in depth sampling of these delectable buns alongside other tasty regional favourites, why not consider one of our evening food tours on offer?