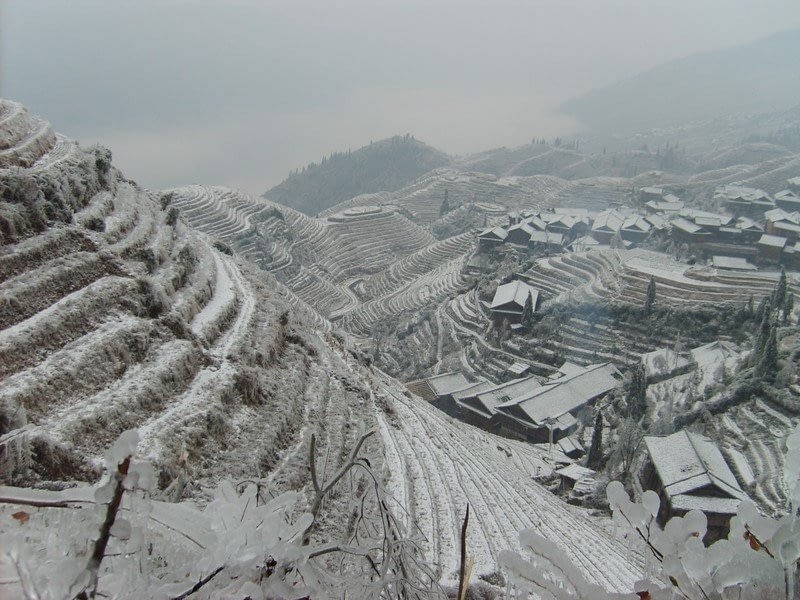 A trip to China would not be complete without a visit to Yangshuo area, in the south of China. If you have seen the movie The Painted Veil, this was shot mainly in Guangxi province, officially called the Guangxi Zhuang Autonomous Region. It is one of five so-called autonomous regions where the number of ethnic minority groups are higher than in other places – in Guangxi, it is the Zhuang minority (the Mongols in Inner Mongolia, Tibetans in Tibet, Uyghur in Xinjiang and Hui in Ningxia). While they still answer to the federal government, they benefit from more independence in finance, economic planning, arts and culture. The spoken and written languages of these ethnic groups are protected, with greater or lesser success…

A few years ago friends visited us in December and wanted us to take them to see off-the-beaten-track China. We flew from Shanghai to Guilin (2h50 flight), took a bus to Yangshuo, then a smaller bus to Ping´an, famous for the Longsheng rice terraces. As it was winter everything was covered with a thin layer of snow and ice. The bus driver started talking to the passengers in the front and pointing at us four. I could not understand because they were speaking Zhuang dialect, but I caught the word «laowai», slang for foreigner. Suddenly the bus stopped and somebody instructed us to get off the bus in Mandarin. “You are laowai, the road is too slippery and we can´t take the risk with foreigners. Please get off now.”  So there we were, stranded on the side of the road, freezing cold with our backpacks, watching as the bus sped off. In a way, we were glad that they kicked us off because we trusted our legs more than that skating bus! (If only we had paid for an Imperial Tour rather than gone off back-packing by ourselves!) After a two hour hike up, we finally made it to Ping´an. I had visited the area in spring and fall when the rice terraces are covered in a wide range of green shades, but this time everything was white. It was incredible and I could not believe my eyes. Unfortunately, since everything was frozen, the water pipes in our hotel were frozen too which meant no hot water or heating. But as we hiked through the scenic, fairytale landscape wrapped withgloves, hats, scarves, it really did not matter!

Now as I am sure you are thinking, this is not really my definition of luxury China travel!  And you are absolutely right. That is why Imperial Tours’ guests usually spend two nights at the luxurious Banyan Tree Resort (one of China’s top five luxury rural getaways) in Yangshuo, where one wakes up surrounded by karst peaks. Here you venture on a traditional bamboo raft for a relaxing ride along the Li River in the early morning to avoid the crowds. The remainder of the day is spent exploring the beautiful countryside, by bicycle or by car, wandering through rice paddies and learning how to make soy milk and tofu from villagers.

For those who would like to spend more time in the area, we can arrange a night or two in Ping´an at the Li´an Lodge (while relatively basic and not at the level of our typical five-star hotel choices, accommodation is clean and comfortable). You will be led on a hike between several minority villages, offering you the best views of those spectacular terraced rice fields carved into the hillsides more than 500 years ago by Zhuang minority farmers.

All without frostbite, we promise!

– Gwen is an itinerary designer at Imperial Tours.

Read this post from Guy Rubin to learn more about the region’s history.